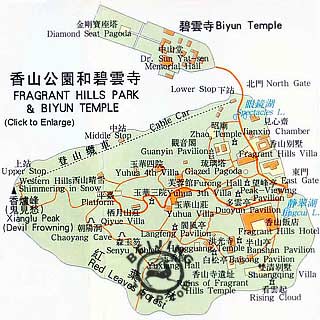 The Fragrant Hills Park is located twenty kilometers (twelve miles) southwest of central Beijing. It is renowned for its imperial garden style and covers an area of 160 hectares (395 acres). There come two popular explanations for its name. One suggests that a huge rock at the peak of the Fragrant Hills looks like an incense burner, and that fragrance seems to rise from the burner at dawn and at dusk. The other proposes that there used be many apricot trees on the hill, making the hill fragrant during their flowering period.


This noted garden was originally built in 1186 during the Jin Dynasty (1115-1234) and was enlarged and enhanced during successive dynasties. During the Qing Dynasty (1644-1911), large-scale constructions were carried out on it, leading to an alternative name 'Jingyi Garden'. The Fragrant Hills became one of the three famous hills of Beijing and the garden one of five famous imperial gardens at that time. In 1860, the garden was burned down by the Allied Anglo-French Forces and in 1900 it was devastated by the Eight-Power Allied Forces of Britain, Germany, the United States, France, Tsarist Russia, Japan, Italy and Austria. The park has since been restored and opened to the public.


In the south part of the park the main scenic spots are the Shuangqing Villa, Xiangshan Temple and Yuhua Villa. Shuangqing Villa was once the residence of Mao Zedong, the first chairman of PRC, and now exhibitions are displayed within it. Xiangshan Temple was originally built in 1186, but only a stone screen and stone stele have survived. The quiet Yuhua Villa is in the center of the park and is characterized by its courtyard style.


Xianglu Peak (Incense Burner Peak), Zhao Temple, Jianxin Residence and the Memorial Hall of Dr. Sun Yat-sen are the features of the north part of the park. Xianglu Peak, with an altitude of 557 meters (1,827 feet) is the main peak of the Fragrant Hills. The path to it is rather precipitous and difficult for visitors to climb, but they can reach it by cable car from the north gate of the park, taking eighteen minutes only. From the peak, a panoramic view can be taken in. Zhao Temple was built early in 1780 during the Qing Dynasty to receive the Sixth Panchen Lama. This Tibetan-style temple has a most delicate Paifang (an ancient archway) and a seven-tier glazed pagoda with multi-layered eaves. Jianxin Residence was constructed in 1522, adopting an architectural style prevalent in South China. Emperor Qianlong, the fourth emperor of the Qing Dynasty, used to read and give banquets in this courtyard during his stay at the garden.


The park is set off by the splendid hill, exquisite lakes and ancient trees. When autumn comes, the leaves of over 94,000 chittamwood trees on the hill begin to turn red, between mid-October and mid-November. Surely, a spectacular scene! So the park is a resort that shouldn't be missed when touring Beijing in autumn.