Yonghe Temple, aka Yonghe Lamasery or Lama Temple, is the largest and best-preserved lamasery in Beijing. It was built in 1694 during the Qing Dynasty (1644-1911) as the residence of the Emperor Yongzheng (the third emperor of the Qing Dynasty) before he ascended the throne. In the year 1744, the residence was completely converted into a lamasery. So this resplendent architectural complex is endowed with the style of an imperial palace, making it distinctive from others. It occupies an area of 66,400 square meters (16 acres) and is described as a mini-palace with yellow glazed tiles on the roof and red walls circling the group of buildings.


As a result of the ancient architecture, every element of the temple is entirely symmetrical, with main halls on a north-south axis and wing halls on both sides. It comprises of a courtyard in the south and five main halls in separate courtyards in the north: the Hall of the Heavenly Kings, the Hall of Harmony and Peace, the Hall of Everlasting Blessings, the Hall of the Dharma Wheel and the Pavilion of Infinite Happiness. Furthermore, this splendid temple combines various architectural styles of the Han, the Manchu, the Mongolian and the Tibetan. 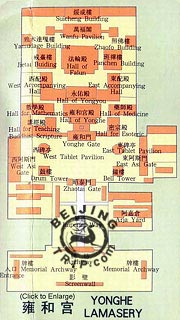 In the south courtyard, a large wall screen and three tall Pailous (Pailou: a form of Chinese traditional buildings) herald the entrance to the building. After walking through the imperial passageway, you will reach the Zhaotai Gate which is the entrance to the north yard. A drum tower in the west and a bell tower stand solemnly as though greeting visitors.


Hall of the Heavenly Kings:


Hall of Harmony and Peace:

On stepping out of the Hall of the Heavenly Kings you will see a courtyard. The courtyard is centered on the Hall of Harmony and Peace and has four wing halls. The Hall of Harmony and Peace is laid with statues of three Buddahas: Sakyamuni (Buddha of the Present), Kasyapa Matanga (Buddha of the Past) and Maitreya Buddha (Buddha of the Future). Just in front of the hall, a stramonium hill is both a precious art treasure and a holy thing of Buddhism. The four wing halls are where lamas study the Esoteric Buddhism, Exoteric Buddhism, Tibetan medicine, astronomy and geography. A copper cooking vessel made in 1747 in the courtyard is reputed as one of the 'three rarest objects in Beijing'.

The Hall of Everlasting Blessings in the adjacent courtyard was the residence of Emperor Yongzhen when he was still a prince. The Amitabha (Infinite Life Buddha), the Medicine Buddha, and the Lion Buddha are positioned in the hall. Two depictions of White Tara and Green Tara respectively are hanged along the sides of the wall; the picture of Green Tara is quite unusual as it is made of over 4,000 pieces of silk of different shapes and colors.


Hall of the Dharma Wheel:

The Hall of the Dharma Wheel is where lamas hold ceremonies and read sutra. The hall houses a statue of Tsong Khapa, the father of the Yellow Hat Sect of Tibetan Buddhism. Behind the statue, there is an exquisite woodcarving in a shape of hill which has 449 statues of Arhats (originally 500 statues). A fine mural on the wall gives a detailed account of the whole life of Sakyamuni. Also displayed here are some Buddhist scriptures, the Gangyur of Tripitaka included. In the assistant halls five Heavenly Guardians are enshrined.

The Pavilion of Infinite Happiness, the last main hall, is the highest hall of this temple. It is a three-storey building, accompanied by two smaller pavilions. In the main hall, a huge statue of Maitreya is positioned which the seventh Dalai presented to the Emperor Qianlong, the son of Emperor Yongzheng. The entire statue which is carved from a rare sandal tree is 26 meters (85 feet) in height and eight meters (26 feet) in diameter, with eight meters (26 feet) buried under the ground. A niche for Buddha in the assistant hall is another excellent woodcarving which is carved with ninety-nine lifelike dragons.