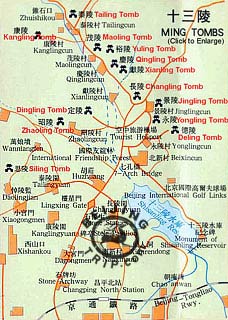 The Ming Tombs lie in Changping County, about 50 kilometers (31 miles) northwest from the urban area of Beijing. It is actually a tomb cluster of the Ming Dynasty (1368-1644), including thirteen emperor's mausoleums, seven tombs for concubines and one grave for eunuchs. This cemetery is world famous because of the thirteen emperors buried here. Sitting at the foot of Mt. Yan and occupying an area of more than 120 square kilometers (29,653 acres), it appears extremely spectacular. It was listed in the World Heritage List in 2003.


Each emperor's tomb was constructed at the foot of a separate small hill, but they all share a main road called the Sacred Way. The thirteen emperor's mausoleums are similar in their architectural style and overall arrangement, only differing in size and complexity of their structures. They used to have a forecourt where memorial ceremonies and sacrifices were held and a tomb mound at the back. Comparatively speaking, Changling (Chang Tomb) is the most grand, Yongling (Yong Tomb) the most delicate and Siling (Si Tomb) the smallest.


The Sacred Way is seven kilometers (4.3 miles) long and leads to Changling (Chang Tomb) directly. Chang Tomb is the largest and oldest of the tombs. Construction on the mausoleum began in 1409 and lasted four years. Buried here are Zhu Di, the third emperor of the Ming Dynasty, and his empress.

The forecourt has three courtyards and all the halls are covered with yellow glaze tiles on their roofs. The second yard was built after the Hall of Supreme Harmony of the Forbidden City. It is one of the largest wooden buildings in China and is supported by sixty unpainted poles made of nanmu. Unearthed objects are on display in this hall. Behind is a tower called Ming Lou (Bright Tower), the symbol of Chang Tomb. It connects the burial mound, the circumference of which reaches approximately one kilometer (0.6 mile).


Dingling (Ding Tomb) is the only one excavated in this graveyard up till now. Zhu Yijun, the thirteenth emperor of the Ming Dynasty was inhumed together with his two empresses. Constructed between 1584 and 1590, this mausoleum used to have bridges, a stele pavilion, halls and towers and annexes on the ground. Hundreds of years later, only a stone tower, Bright Tower, survives following several fires. Behind the tower is the underground palace, 27 meters (88.6 feet) in depth. Visitors may enter via a tunnel. The stone palace occupies an area of 1,195 square meters (0.3 acre) and has five halls. Gates of the main halls are made of white marble, with fine thrones in the central hall, coffins and burial chests at the rear hall. Some precious articles excavated are on exhibition like crowns, ornaments, and utensils.


Built in 1538, Zhaoling (Zhao Tomb) lies to the southwest of Ding Tomb. It is the mausoleum of Zhu Zaihou (the twelfth emperor of the Ming Dynasty and his three empresses. It is the best representation of a tomb complex because of its fully restored complete surface structures, consisting of four bridges, a stele pavilion and halls. At Ling'endian (Hall of Eminent Favor), offerings and information on this emperor and his empresses may be seen.