From the 1st to 5th day of the Chinese Lunar New Year, Temple of Heaven Culture Week will be held at Tiantan Park. A total of 320 performers will act as the emperor, guards, officials, dancers and musicians and show visitors the solemn ancient worshipping ceremonies to the heaven. 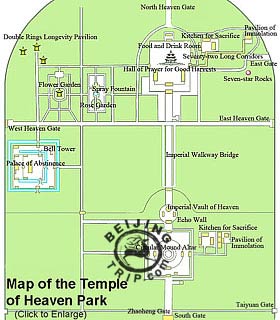 The Temple of Heaven (also Tiantan Park) is the grandest cult architecture complex in the world and a masterpiece of the Chinese people created in ancient times. It covers 2,700,000 square meters (667 acres), which is nearly four times the area of the Forbidden City. The temple was constructed in 1420 during the Ming Dynasty (1368-1644), and was enlarged during the Qing Dynasty (1644-1911). Emperors of the two dynasties used to worship the heaven and pray for rich harvests, as the feudal emperors thought they were the son of the heaven.


This complex has two parts: the inner temple and the outer temple and is surrounded by two high walls. The two walls are elaborately constructed: the north section of walls is semicircular while the south section is square. This layout of walls reflects the ancient Chinese concept of the cosmogony: the sky is round and the earth is square. The primary buildings in the temple are the Altar of Prayer for Good Harvests in the north and Circular Mound Altar in the south. They are lined in the central axis of the whole temple and connected by a 36-meter-long bridge. Subsidiary buildings include Imperial Vault of Heaven, the Hall of Abstinence, a Bell Tower and relatively small halls.

Altar of Prayer for Good Harvest 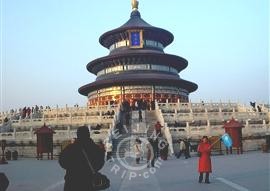 The Altar of Prayer for Good Harvest was where the emperors prayed for favorable weather and ample harvest. The Hall of Prayer for Good Harvest, the principle building of the altar, is thirty-eight meters (125 feet) high. It was built on a three-tiered circular terrace which measures six meters (twenty feet). The roof of the hall is covered with dark blue glazed tiles which represent the color of the sky. With three circular balusters on the terrace, the grand hall seems much loftier.


The structure of the Hall of Prayer for Good Harvest is a wonder. The pavilion-style hall was built entirely of wood, but it has no crossbeam or purlin inside. Twenty-eight pillars support the three-tier building, with the four in the centers symbolizing four seasons of a year. Twelve pillars on each side to present twelve months and twelve Shichens of a day (a unit of time used by the ancient Chinese, one Shichen is equal to two hours). 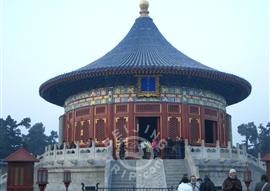 The Circular Mound Altar was where the sacrificial rite was held on the winter solstice. It was constructed in 1530, younger than the Altar of Prayer for Good Harvest. The Circular Mound is a three-tier round platform which was built with bluestone. Each terrace is edged by white marble balusters. The number of both flagstones in a circle and baluster posts is multiple of nine, as nine represents infinity which is the characteristic of the heaven. If you stand on the flagstone in the center and speak in a quite low voice, you will hear the echo in 0.07 seconds.


To the north of the Circular Mound is the Imperial Vault of Heaven in which the tablet of God of Heaven is placed. The main hall is built to be a round pavilion with dark blue roof symbolizing heaven. The East Assistant Hall worships the gods of stars including the sun, the dipper, Venus, Jupiter, Mercury, Mars and Saturn. In the West Assistant Hall, enshrined are the gods of natural phenomenon including wind, rain, thunder and lightning. This courtyard is encircled by a round wall with a length of 193 meters (633 feet). The wall is the famous 'Echo Wall'. If one whispers into the hall, another person who is standing at the wall with a distance 100 to 200 meters (328-656 feet) can hear the speaker clearly.