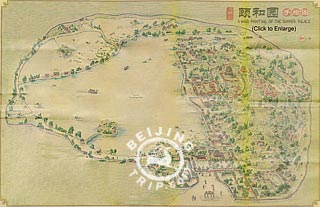 The Summer Palace, Yiheyuan in Chinese, is the most celebrated imperial garden in China. The garden came into existence early in the 1750s and had once been a summer resort for the emperors. It is acclaimed as a museum of gardens in China, for a visit to this garden bestow on sightseers a glimpse of representative scenes all over China.


The Summer Palace (Yiheyuan), located in the northwestern outskirts of Beijing, is the largest and most famous imperial garden in China. The palace features hundreds of architecturally distinct buildings, halls, pavilions, pagodas, bridges and corridors dispersed among magnificent and elegant gardens. It has an area of 290 hectares (717 acres), three quarters of which is water. The palace has three unique areas: Court Area, Longevity Hill Area and Kunming Lake Area.

The garden was originally named the Garden of Clear Ripples (Qingyi). It was a summer resort for the emperors in the Qing Dynasty (1644-1911). In 1860, the garden was burnt down by the Anglo-French Allied Forces. In 1866, Empress Dowager Cixi rebuilt the garden using embezzled funds from the imperial navy and named it the Summer Palace (Yiheyuan). In 1900, during the Boxer Rebellion, the Eight-Power Allied Force ransacked the palace. After another reconstruction in 1903, the garden was restored to its original beauty and magnificence. As the grandest garden in China, it was added to the World Culture Heritage list in 1998.

The East Palace Gate (Donggongmen) opens into the Court Area. Inside is a group of typical courtyard houses connected by porches. The center building is the Hall of Benevolence and Longevity (Renshoudian) where Emperor Guangxu, the last emperor of the Qing Dynasty, held court and conducted official business during his stay at the garden. Now, an exquisitely carved screen, a bronze dragon and bronze phoenix are on display. To the northwest are three halls: the Hall of Jade Ripples (Yulantang) where Guangxu lived; the Hall of Virtue and Harmony (Deheyuan), the biggest theater in the Qing Dynasty; and the Hall of Joyful Longevity (Leshoutang), a splendid residence of Empress Dowager Cixi. To the northeast is the Garden of Harmony and Enchantment. This was where the emperors spent their leisure time fishing.

Hall of Jade Ripples, Garden of Virtue and Harmony & Hall of Joyful Longevity

The Longevity Hill Area faces the Kunming Lake in the south and is backed by the Rear Lake (Houhu) in the north. In the front hill, grand halls are built along a north-south axis. The halls are the Hall of Dispelling Clouds (Paiyundian), Tower of Buddhist Incense (Foxiangge) and the Hall of the Sea of Wisdom (Zhihuihai). The Hall of Dispelling Clouds, with red pillars and yellow tiles, is the most splendid building of the whole palace. The grand Tower of Buddhist Incense, towering 41 meters (134.5 feet), is the symbol of the Summer Palace. The Hall of the Sea of Wisdom on the top of the Longevity Hill is a Buddhist hall. The outside of the hall is decorated with glazed tiles. There is a Suzhou Market Street (Suzhoujie) at the Rear Lake. With waterway passing through and shops perching on banks, the street looks like the very scene of 'Water Country' in the south region of the Yangtze River.

Along the south bank of the attractive lake, a 728-meter-long corridor (Changlang) is the longest and most famous corridor in China. It serves as a link between the Longevity Hill and the Kunming Lake. Around 14,000 impressive paintings of historical figures, landscapes, birds and flowers adorn this corridor, making it into a fantastic gallery. There is a Marble Boat at the west bank. This boat was built in 1755, in the hope that the governance of the Qing Dynasty would be impregnable under any circumstance. The south part of this natural lake is modeled after the West Lake in Hangzhou. A western bank divides the lake into two parts. Six graceful bridges act as connecters of the entire western bank, among which the Jade Belt Bridge is a favorite of the Emperor Qianlong and Empress Dowager Cixi. The spectacular Seventeen-Arch Bridge (Shiqikong Qiao) connects the eastern bank and Nanhu Island. The bridge is 150 meters (492 feet) long and eight meters (twenty-six feet) wide. 564 stone lions with different expressions and gestures on the balusters are strikingly life-like.