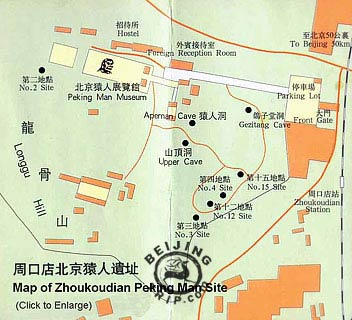 The Peking Man Site is located at Longgu Hill, Zhoukoudian, Fangshan District, approximately 50 kilometers southwest of Beijing's downtown area. This early human site has been shown to be the richest and most comprehensive site representing the early stages of the Paleolithic Age. In 1987, the site was entered onto the World Heritage List without an application.


At the site, the earliest findings of Peking Man, three hominine teeth, were discovered in 1921, 1923 and 1927 successively. This evoked further excavations and research at the site. In 1929, an almost entire skull cap was excavated, attracting world attention. The finding gave convincing evidence of human evolution. Unearthed later were further fossils of Peking Man, over one hundred kinds of animal fossils, and more than 100,000 pieces of stone implements. These Peking Man fossils, including bones of the skull, face, lower jaw, teeth and limbs, come from over forty individuals of varying ages and sexes. The stone implements make it clear that Peking Man was able to make and use primitive stone tools to engage in labor, such as hunting for prey.


Several ash stacks in the cavities were also found at a later stage. These brightly-colored stacks, with a maximum height of about six meters (twenty feet), contain a great number of burned bones and charcoal pieces. The ash remains show that the Peking Man knew to store kindling materials and use fire to cook prey and keep warm. This discovery provides evidence that the date when people began to use fire is hundreds of thousands of years earlier than previously believed.


According to research on the sediments, it is estimated that Peking Man is the hominid appearing when apes evolved into human beings. They lived between 700,000 and 200,000 years ago during the Stone Age. They made stone appliances mainly by hammering, accompanied by other methods. They had an average brain capacity of 1,090 milliliters, less than modern man at 1,400 milliliters. They were shorter, with the male being 156 centimeters (5.1 feet) and the female 150 centimeters (4.9 feet). Their life-span was also short, 68% of them dying before the age of 14 years, with only 4.5% reaching more than 50 years old.


Next to the Peking Man site and near the top of the hill, lies the Upper Cave Man Site. Here three entire skull caps and other incomplete bones belonging to three adults were discovered. Scientific dating has shown that they lived 18,000 years ago. Needles made of bone and pendant adornments prove that the Upper Cave Man could sew clothes with animal skins as materials and adorn themselves and appear to be a little different from modern humans.