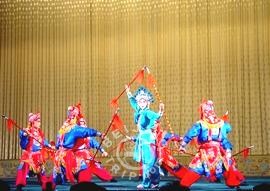 Beijing Opera represents the finest combination of literature, music, dance, martial arts, fine arts, acrobatics and many other arts available. Its way of performing is of as much a feature, differing from opera, pantomime and drama. The Peking Opera is a kind of art that pays equal attention to 'Chang (Singing)', 'Nian (Speaking)', 'Zuo (Acting)' and 'Da (Fighting)'. Singing in Beijing Opera has the certain tune that expresses the sentiment of the dramatic persona;Speaking in the play is the speech except singing; Acting is the performance of movement and expression; Fighting is the martial arts performed by dancing. It enables the audience to be inspired by the affection, not only from the language but also from the music, the physique and the fine arts. Simultaneously, Beijing Opera provides the opportunity to appreciate the pleasing stylistic and artistic harmony of the dance and music, the strength of the rhythm and designs even from only experiencing one act.

Beijing Opera originated from the middle period of the Qing Dynasty (1644-1911). In the 55th year reigned by the Emperor Qianlong (1790), the most famous four theatrical troupes in Anhui – Sanqing Troupe, Sixi Troupe, Chungong Troupe and Chun Troupe went to Beijing in succession to show their opera performance and then obtained the unprecedented success. Then, based on 'Anhui Opera', 'Han Opera', absorbing the essence of the local folk ditty like the 'Kun Opera', 'Yiyang Opera' and 'Shaanxi Opera' and also mixed with characteristics of Beijing dialect, Beijing Opera was formed. Although formed in Beijing, it is not the native-born but a melting opera.


There were many names for Beijing Opera in its history such as Pihuang, Erhuang, Huang Qiang, Peking Opera (Jingdiao or Jingxi in Chinese), Pingju Opera and Chinese Opera (Guoju in Chinese). The earliest name of the Beijing Opera was seen in the newspaper of that time – 'Declaration' in the second year of the Emperor Guangxu (1876).


The Beijing Opera was officially formed after the 20th year of the Emperor Daoguang (1840). At that time, the formats of each kind of arias and the language characteristic of Beijing Opera initially came into being. New changes appeared in the Opera's role. A list of plays possessing the characteristics of the Beijing Opera and the first generation of the opera actors were also taken on.

Similar to the western opera, the Beijing Opera is a combination of singing, dancing, martial arts, music and literature, so it is also called the 'Oriental Opera' by western people. In their own cultural backgrounds, they all have obtained classical status.

Aria – The music for the voice of Beijing Opera belongs to the Ban-qiang (a kind of structural style in drama), including two arias of Erhuang and Xipi, so the Beijing Opera is also called 'Pihuang'. The arias commonly used in Beijing Opera also include other tunes like the Nanbangzi (an aria in Bangzi Opera), Sipingdiao (an aria in Sichuan Opera), Gaobozi (an aria in Anhui Opera) and Chuiqiang (the Anhui Opera with flute accompaniment).

Theme – The Beijing Opera is always based on the political and military struggle of an historical theme; the story mostly is taken from an historical novel.

Role – Beijing Opera has very strict role division. There were seven in the early time: Sheng, Dan, Jing, Mo, Chou, Wuhang and Longtao (Walking-on). Later it was converged into four: Sheng, Dan, Jing and Chou.   'Sheng' acts the masculine positive role. According to the different age, identity and character, it is also divided into three kinds: Laosheng (Old Men), Xiaosheng (Young Men) and Wusheng (Military Men).   'Dan' acts the feminine positive role and is also divided into many kinds: Qingyi (the honorable women attired in distinguished dress), Huadan (the innocent and extroverted young ladies or the shrewish and extravagant female), Laodan (Old Ladies), Wudan (Military Women) and so on.   'Jing' acts the supporting role of great-hearted masculine, the characteristic is that their faces must be painted; Therefore Jing is also called 'Face-Painted Role'.   'Chou' acts as a lively, humorous, quick-witted masculine; sometimes they also play the reverse role which is sinister and sly.   Each kind of role also has different face-painting and dressing to indicate their identity. 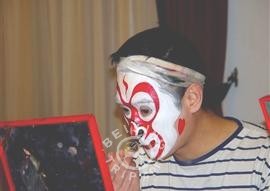 Face-painting – The make-up that the Beijing Opera puts on the actor's face also has a special characteristic for displaying the character of the specific role. Using particular colors on the actor's face to symbolize their character and quality, role and destiny is not only the major characteristic of Beijing Opera, but also the key to understand the opera's plot. Simply speaking, the red painted-face has the commendatory meaning, representing allegiance and gallantry; The black painted-face is more neutral, representing valor and wise; The blue and the green ones are also neutrality, representing the bold and courageous hero; The yellow and the white painted-faces has the derogatory meaning, representing atrocity and duplicity; The golden and the argentite painted-faces are more mystical, representing god or a monster.

Dressing – The clothing used in the Beijing Opera also represents particular characteristics and specific importance to attract the audience's attention. It took the example of every-day clothing in ancient Chinese times as the foundation, imitating the dressing-style of the Ming Dynasty and later extracting the attire characteristic and style of the Qing Dynasty and the dressing of Baqi ('Eight Banners': military organization of Manchu in Qing Dynasty). After many artists' refinement, recapitulation, beautification and decoration, the appropriative clothing of a certain pattern was then formed and the shoptalk of Beijing Opera called it 'Xingtou' (the actor's costumes). Xingtou is the general term used for clothing for all kinds of roles, including long gowns, short clothes, armor, casque hats, boots and shoes, as well as assistant clothing or things attached to dressing.


Beijing Opera performances are renowned for their very vibrant and gorgeous colored costumes. It is the main part of the character modeling on the stage. The Peking Opera clothing captures the rich experience and creates the unique artistic style that is so admired and loved to be seen and heard by mass audiences.

List of Plays – Beijing Opera has many plays; it is said that the number of the plays is approximately 3,800. At present, the plays being performed are mainly of three kinds: the traditional play (nearly 1,300), the newly-written historical play and the modern play.

Since the Peking Opera has formed, many outstanding actors have emerged. They have all contributed to Beijing Opera's innovation and development regarding the aspects of aria, performance, plays, role modeling and so on. Thus many genres with much stronger influence have been created.

Mei Lanfang - one of the most remarkable performing artists in Beijing Opera, was born in Beijing with a family under a very poor circumstance in childhood. His life was bitter and he had no opportunity to go to school, so he went to the troupe when he was 8 years old to learn the Beijing Opera. Mr. Mei mounted the stage when he was 11 years old to perform the plays of the Beijing Opera. He has been an opera actor for more than 50 years, performing hundreds of traditional plays and over 30 modern plays. He portrayed many bright and lifelike female figures on the stage and became the glorious model in Chinese Beijing Opera and even within the entire artistic circle. 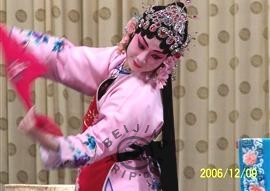 This renowned artistic master's background was certainly not outstanding or indeed a contributory factor to his success. However he attributes his extraordinary artistic achievements modestly to the way he emulated his peers, and to his total dedication, diligent studying and hard training, and his continual spirit and desire to strive for perfection. His style of spoken parts in the Beijing Opera is unique; his performance on the stage with ordered step routines, accurate rhythm and graceful posture, was quite exquisite and exactly accorded with his role status. Moreover, his performance was often refined into the exquisite dance, which has enriched and developed the performing arts of Dan in Beijing Opera, finally forming the famous genre of Mei.


In 1919, Mei Lanfang led the troupe that went to Japan to perform. This was the first time that this famous Chinese art- Beijing Opera had an overseas dissemination; in 1924, he led the troupe to perform once again in Japan; in 1930, he led the opera team which was comprised of 20 people to America to give a visiting performance and obtained enormous success; in 1934, he went to Europe to visit by invitation and performed in the Soviet Union, receiving the recognition of the European theatrical circle. Thereafter, the whole world regarded Beijing Opera as the school of Chinese histrionics.


Beijing Opera, known as the essence of Chinese national drama, has tremendous influence in both China and abroad. As a kind of artistic form, its continual path of development is full of the Chinese nationality's creational fervor and also displays the characteristic of the Chinese nation: Sincere and warm, optimistic and aspirant. Therefore, today cannot be considered as the later years of Beijing opera, because it will never be old, and still has much potential nurturing to fulfill in its life. Beijing Opera will continue to aim for future development as it strives vigorously to hold its worthy place, a status that no other forms of art can be allowed to be a substitute for.