Shichahai Hutong
Made up of 15 smaller hutongs, Shichahai Hutong is along the Shichahai Lake, not far from the Bell and Drum Towers in Beijing. Many former courtyards of celebrities are in the hutong, such as the Prince Kung's Mansion, the former residence of Guo Moruo (a famous Chinese litterateur and ideologist), and the former residence of Song Qingling (a great Chinese revolutionist). Reflected by the clear lake, the hutongs here appear small but neat, while the ancient houses along the 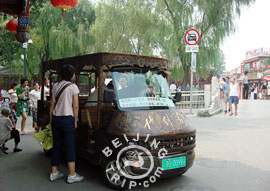 hutongs are elegant with grey bricks and tiles. There is special Hutong Tour in Shichahai Hutong, including the former residence of Guo Moruo, the Bell Tower, Shichahai Lake, Yinding Bridge, and the garden of Prince Kung's Mansion, which takes about 2.5 hours for the entire trip. You can also visit the primary schools in hutongs, have a visit to the residence of common people and talk and eat with them to experience the Beijingers' life. Now the bank of Shichahai Lake has became a bar street, making Shichahai Hutongs a little bit confusing but full of vitality. Both the old hutongs and the modern bars are telling the stories of hutongs' growth.

Nan Luo Gu Xiang
Built in 1267, the Yuan Dynasty, Nan Luo Gu Xiang is one of the oldest streets in Beijing. It is located near the Forbidden City, 786 meters (859.6 yards) long and 8 meters (8.75 yards) wide. The hutong was a typical affluent region since the Ming and Qing Dynasties, because many princes of the Ming and Qing Dynasties, officials, celebrities, and generals once lived here. Therefore, there are many former residences of these celebrities, such as Prince Seng's Mansion, the mansion of Wen Yu, a famous official of the Qing Dynasty, and the former residence of Mao Dun (a famous modern writer and critic in China). Now over 30 all-styled bars, coffee shops, restaurants and small shops are distributed in this hutong, including Passers-By Bar (a small restaurant famous for Pizzas and Nepalese snacks), Wenyu Cheese Store, and Plastered 8 (a T-shirt shop famous for the special patterns of 1980s' Beijing Style on the T-shirts).

Da Zha Lan (Big Fence)
Da Zha Lan (Big Fence), also pronounced Da Sha Lanr by Beijing Locals, is another famous Beijing Hutong. It is a 266-meter (291 yards) long commercial street with a history of 500 years, appeared in the Yuan Dynasty, built in the Ming Dynasty, and developed in the Qing Dynasty, It is said that this hutong was originally named Lang Fang Si Tiao. During the Qing Dynasty, the government built big fences on each of the streets to prevent thieves and robbers during the night. The fence on Lang Fang Si Tiao was much bigger and was preserved longer, so the name of the Hutong was gradually changed to Da Zha Lan which means a big fence. 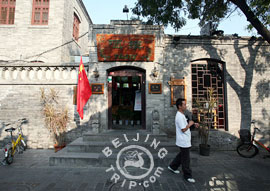 There are two popular sentences about Da Zha Lan: "if you want to buy something, go to Da Zha Lan", and "wear the hats of Ma Ju Yuan, stand in the shoes of Nei Lian Sheng, wear the clothes of Ba Da Xiang, and take the money of Si Da Heng Banks", both of which show the prosperity of Da Zha Lan. Many of the shops in the Hutong are over hundred years old and are very famous both at home and abroad, such as the hat shop Ma Ju Yuan, the shoe shop Nei Lian Sheng, the silk shop Rui Fu Xiang and the tea shop Zhang Yi Yuan. After maintenance, Da Zha Lan still remains its old style of 1910s, but becomes more modern with broader streets and brighter shops.