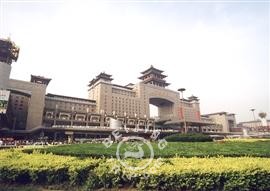 
In China, traveling by train is rather cheap and safe, especially when your trip is long. Due to the broad territory of the country, the trains take more time of course, to cover the vast distances than do planes. It is best to ask for the timetable of your desired train before starting your journey. Long-distance trains and overnight trains are equipped with a dining car, meal less opulent and price higher than that in restaurants. Carts providing drinks, fruits, snacks, and other items for sale are pushed along the aisle, price also a little higher. The toilets will not be as clean as you would expect, and they can't be used at stations. Sometimes, there are sales persons selling small products like socks, keepsakes and toys, and they often give a lively introduction about their articles.

In China, the passenger trains are always designated into different classes according to the speed, and these different classes of trains have varied train numbers. If a train has an odd number, it means the train will travel in the opposite direction of the capital; otherwise, an even-numbered train will travel towards the direction of Beijing. Besides, the train number is always prefixed with a Chinese Pinyin (Chinese phonetic alphabet) written in upper case to show the speed of the trains. For fast trains, they always arrive on time and are seldom delayed, except when there are inevitable and unforeseen factors. Ordinary trains and temporary trains are more likely to be behind schedule than others. When an ordinary or temporary train receives a stop signal, it will stop to make way for a fast train.

The chart below is used as an example:

There are four standard classes of seats available, namely, the soft sleeper, hard sleeper, soft seat  and hard seat. The price of the seat will vary from the soft sleeper which is the most expensive to the harder seat, which is the cheapest. In the train, you can change your seat class to a higher class or to a lower class. The difference of the ticket cost will be charged or refunded according to the seat classes, and a service fee will be charged at the same time.

Soft sleeper: There is a 2-bed sleeper as well as a 4-bed sleeper in a soft sleeper berth, but the latter is more common. On each side of a 4-bed sleeper berth, there are two sleepers, an upper one and a lower one, and the price for an upper sleeper is cheaper. Hard sleeper: On both side of a hard sleeper berth, there are three sleepers, a lower one, a middle one and an upper one. The price for an upper sleeper is the cheapest among these berths. Soft seat: The soft seat carriage is more comfortable and less crowded than the hard seat carriage. Hard seat: Owing to its lower price, the carriage is often crowded and not as clean and comfortable as the other carriages. Besides, during the Chinese legal holiday, the summer vacation, and the Spring Festival, the ticket for a hard seat is always difficult to buy, and there are many people who hold standing-room tickets in the carriage.


How to Buy Train Tickets

All train tickets can be booked at most 10 days in advance. Besides, people can buy long-distance train tickets for other large stations within 12 days in Beijing. If you buy tickets at the ticket offices instead of railway stations, you will be charged CNY 5 for each ticket as a service fee. Purchasing tickets on your own would be confusing and time consuming. You are advised to book your tickets via travel agents at hotels, though they will charge more, because of service fees. Beijing West Railway Station and Beijing Railway Station have special counters to serve foreigners and guests from Hong Kong, Taiwan and Macao. Passports or other certificates are required.

In Beijing, there are many outlets selling train tickets, therefore, the selling of tickets runs out within a short time. It is best to buy a ticket as early as possible. The ticket offices are always marked by the Chinese characters '售票处' in a very effective color scheme. Ticket scalpers are more active during the Chinese legal holidays, summer vacation and the Spring Festival. You would better off to buy tickets at the ticket windows or ticket offices to ensure that you have a legitimate and legal ticket for your journey.