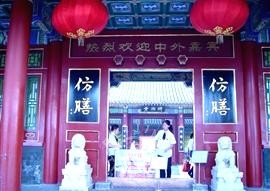 As Beijing was the capital of several dynasties, Imperial Court Food is a branch of Beijing Cuisine. Food of this kind was once only prepared for the members of the imperial court and was not accessible to ordinary people. Now, money permitting, you can have a taste of the Royal Feast of Complete Manchu-Han Courses, a most bounteous feast of Imperial Court Food.


The greatest achievement of Imperial Court Food is the Royal Feast of Complete Manchu-Han Courses, which is representative of Chinese food. As the name suggests, the grand meal was formed on the basis of the Manchu and Han cuisines. It contains one hundred and thirty-four hot dishes and forty-eight cold ones, not counting fruit and desserts. In total there should be at least one hundred and eight courses. It is so great a feast that it is divided into six meals which last three days or so. It assembles eight kinds of rare raw materials from the mountain, eight rare terrestrial ones and eight rare marine ones. Up to now, only two restaurants are able to serve this grand banquet: Fangshan Restaurant in Beihai Park and Tingliguan Restaurant in the Summer Palace.


Food of this kind combines all kinds of delicacies that stress fresh, light and tender flavor. During the Qing Dynasty (1644 - 1911), the varieties increased to two hundred. Other famous dishes, apart from the Royal Feast of Complete Manchu-Han Courses, include Silky Chicken Breast, Lotus Leaf Pork Fillet, Pea Cake and Steamed Corn Bread. As the Royal Feast of Complete Manchu-Han Courses is expensive, it is also a good idea to enjoy some palatable dishes such as distinctive snacks or desserts.


The elaborate dishes typically contain superb raw ingredients, have elegant color and shape, and are very nutritious. The raw material is selected according to its habitat, quality, size and exact parts. The whole dish has a pleasing presentation, applying ingenious means of molding. The course must be made from at least two kinds of materials, which is a common rule of the imperial cuisine. The material is cut or sliced to the right size, neither big nor small. The imperial food also attaches great importance to the dishware which is luxurious, classical and elegant. The numerous dishes are made of gold, silver, jade, hawksbill, ivory or fine china.