Beijing Snacks, a type of Beijing Cuisine, is a product of nation-wide snacks. The Beijing snacks reached its peak with over three hundred kinds, but unfortunately less than one hundred of them have survived until today. Compared with its golden age, the snacks have declined in kinds; even so, the snacks are of a great variety. The snacks can be divided into three groups: the Islamic style, the Han style, and Imperial style. Now nearly eighty percent of the snacks are of Islamic styles. 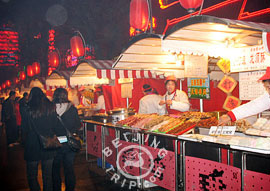 As it's a kind of Islamic snacks, only the tripe of sheep or cattle is used as the ingredient. The sliced tripe is put into the boiled water and is then dipped in the sesame sauce. A finely-boiled tripe is crisp and tender, really a nice dish!You may also season the sauce with vinegar, onion or mashed garlic according to your taste.

To make the sausage, flour or starch is firstly mixed with flavorings, and the paste is stuffed into prepared pigs' intestine. The long sausage will then be boiled and be cut into cubes to be fried. After mashed garlic is poured on it, the delicious sausage is ready. Usually, diners may use little bamboo sticks for a better convenience.

People in Beijing take this traditional snack as a breakfast. The name is a bit misleading, for the liver is one third of the diet while the intestines of pigs are main ingredient. Unexpectedly, liver and intestine that are fried with soy sauce, garlic and bone soup are not greasy but very light. No wonder it has been a favorite breakfast since early times.

Don't belittle this homely milk. It is very popular with people born and bred in Beijing. As a matter of fact, it is a fermented drink made from mungbean. It is rich in protein, vitamin C and dietary fibre and was once listed in the imperial menus. It doesn't taste well when you drink it for the first time, but you may get addicted to it after several brave tries.

It is beloved by all the people, male or female, old or young. When people in Beijing have clay oven rolls or mungbean milk, they generally like to enjoy them with the fried bread circle. The flour is made into a paste with added salt, alkali and alum. The paste strips are then fried in the hot cooking oil. It is crisp and yellow in color; which makes it irresistible. This snack can be preserved for up to ten days or so without going bad in taste.

It is well-known not only in Beijing, but also in other regions of China. It is made by wrapping the stuffing (usually sweetened bean paste or brown sugar) in a piece of sticky dough. The last step is to roll the wrapped paste in yellow flour made of soy bean, which seems like a donkey wallowing in the ground with the dust rising. This snack finds favor with those who have a natural sweet tooth.


Sticky Rice with Sweet Stuffing (ài wo wo)

For this snack, you needn't worry whether it is in season. It is supplied all the year round. With steamed sticky rice as the coating, it has a rich filling inside. The sweet filling is made from several saute kernels such as peanut, walnut and melon seeds.

This snack is mainly available in spring when the pea is ripe. It is an imperial dish which Empress Dowager Cixi loved very much. It is sweet because sugar is added to the peas after they have been stewed for mashing. The Fangshan Restaurant in the  Beihai Park makes the most authentic Pea Cake. If there happens to be a temple fair in spring, the pea cake is sure to be served.

This sandwich is a little different from your traditional variety. It has the paste outside and meat of sea cucumber, shrimp and pork inside. This item, fried to a rich golden color, is a really tasty snack for seafood lovers. To sample it, you are advised to go the Ruibin Restaurant in Xicheng District.

This is a very common snack in Beijing. There are many varieties, each having a different filling. The Horse-Hoof Pancake which resembles the hoof of a horse doesn't have any filling. The other kinds have bean paste, sesame, brown sugar or dried vegetable, and each has a distinctive flavor.


You may ask, 'Is there a restaurant that supplies all the typical snacks?' Definitely yes. The Nan Lai Shun Restaurant supplies more than seventy kinds of snacks. It's also a good idea to go to the Dongfang Longfu Restaurant which excels in Beijing snacks with Islamic style. If you are enjoying yourselves at the Beihai Park, you may go to the Fangshan Restaurant in the park for the Imperial snacks. Also, you may make your way to the food streets to serve the purpose.