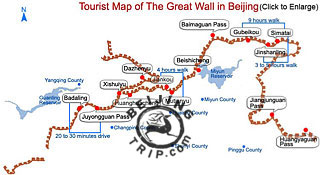 A Chinese saying goes that He who has never been to the Great Wall is not a true man. If we laid the bricks and rocks used in the Great Wall of Ming to form a wall one meter (1.1 yard) wide and five meters (16.4 feet) high, it could circle the earth at the equator with great ease. It is such a spectacular and formidable architectural feat that anyone who comes to China should not miss it under any circumstances.


China's Great Wall is the world's longest architectural structure and is widely renowned as one of the seven great wonders of the world. The wall stretches 6,700 kilometers (4,163 miles) from the Jiayuguan Pass in Gansu Province to the Shanhaiguan Pass in Hebei Province. Like a gigantic dragon, this imposing wall meanders across mountains, spans vast plains and trudges through the barren deserts of China's northern interior.

This amazing marvel of engineering took over 2,000 years to build. It is acclaimed to be a most magnificent miracle created by the Chinese people demonstrating the tenacity, diligence and wisdom of the Chinese people.

Construction of the wall began early in the Warring States Period (475BC-221BC) when independent small states came into existence. In order to defend their territories, long walls were built along the borders. In 221 BC, Qin Shi Huang, the first emperor of the Qin Dynasty (221BC-206BC), toppled the former states and unified China. To protect the country from intrusion of the nomadic Hun ethnic minority in the north, earlier separate walls were joined and extended dramatically. The walls at that time began at Linyao in Gansu Province and ended in Liaoning Province, reaching a total length of over 5,000 kilometers, hence it was known as the 'Ten Thousand Li Great Wall' (Li is a unit of length used by the Chinese and one li is equal to 0.5 kilometer.).

Thereafter, the Great Wall was restored and lengthened time and time again. The later walls were not a long and frail wall but were complete fortifications with more annexes such as: castles, watch towers and beacon towers. In the Ming Dynasty (1368-1644), large-scale extensions generated the 'Great Wall of Ming', the ever longest wall in the history of China. The wall that we see today is primarily the result of a restoration that took place during the Ming Dynasty. However, some sections fell into ruins.

Now, sections at Shanhaiguan Pass, Badaling, Simatai, Mutianyu and Jiayuguan Pass have become celebrated tourist resorts. The Badaling Great Wall is the most famous attraction in China and is always thronged with visitors coming from all over the world.


Hereunder are the introductions to the different sections of the Great Wall of China: